The Art Clinic happens once a month, offering guests an insider view into an art projects and artistic thought processes. Artists participating in Art Clinic have the possibility of presenting work to viewers and receiving cunstructive critique in an informal and open atmosphere.

The Art Clinic is made for Artists and Art enthusiests looking to inspire and be inspired in developing new artistic projects.

Every Art Clinic will present Works of three artists.

Ana Hupe is doing a Ph.D. in Fine Arts - Visual Languages - at Rio de Janeiro’s Federal University (EBA – PPGAV - UFRJ), with tutor Prof. Dr. Tadeu Capistrano. From August 2014 to August 2015, she is living in Berlin, developing her artistic research at Universität der Künste, with Prof. Dr. Hito Steyerl. Holds a Master’s degree in Fine Arts, at Rio de Janeiro’s State University (PPGARTES -UERJ). Bachelor in Social communication by Puc-Rio. From 2012 to 2014 she was a professor at Visual Art’s Graduation School EBA – UFRJ. Ana Hupe is represented by Portas Vilaseca’s gallery, Rio de Janeiro (www.portasvilaseca.com.br). 2014 she held a solo exhibition at Galeria Ibeu, Rio de Janeiro; was one of the artists awarded by the prize Honra ao Mérito Arte e Patrimônio, given by Iphan (Institute of National Historical and Artistic Heritage of Brazil) and showed her work at Paço Imperial, RJ. This year she also took part in Becoming an Image, an artistic residency at Casa do Sol, Instituto Hilda Hilst, SP, Brazil.

Her artistic research deals with performatic writings, texts in an expanded field, photography and video as means for storytelling. It takes place in the experience of inhabiting new spaces as well as in the fictional creation. She is interested in the analogical means of writing, printing and making images. From 2009 to 2013, she integrated the visual arts collective Opavivará! (www.opavivara.com.br). With the group, she took part at many exhibitions in Brazil (f.i. at Museum of Modern Art in both Rio de Janeiro and São Paulo, Casa França-Brasil, A Gentil Carioca Gallery, among many others).

Born in 1982 in Taiwan, Kuo-Wei Lin moved to Paris in 2000 and enrolled at the Ecole Nationale des Beaux-Arts de Lyon in 2002. After attending the Hochschule für Grafik und Buchkunst in Leipzig in 2005, he earned a Master of Art degree from Chelsea College of Art in London in 2007. In 2010, he participated in projects at the Institute für Kunst im Kontext, Universität der Künste Berlin, and in 2012 he earned his Meisterschüler at the Kunsthochschule Berlin-Weißensee.
Kuo-Wei Lin has exhibited his works at the Taipei Biennial, Taipei Fine Arts Museum (2014); at the Kuandu Museum of Fine Arts, Taipei (2013); the Institut Français Berlin (2012); the Centre Emile Hamilius, Casino Luxembourg (2011); the Uferhallen, Berlin (2010); Museum of Contemporary Art, Taipei (2009); the Manggha Centre of Japanese Art and Technology, Krakow (2008); the Tate Britain, London (2007); and the Goethe-Institut Lyon (2006).

Kuo-Wei Lin attempts to reconfigure materials and to intervene in our everyday reading of absurd phenomena, forming ambivalent questions about the experiences of daily life.

Mickaël Marchand conceptual approach of installation incorporate photographs and videos as documentation. Repetition as a protocole of research create series of works linked to the cities he is traveling. Whatever humor that can be perceived, Marchands work has to do with the construction, the structure and the limits of balance. His artistic conscience has always been leading by the need to keep his installations real : « My pieces are in balance without cheating ». 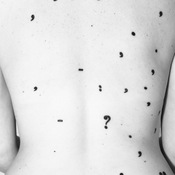 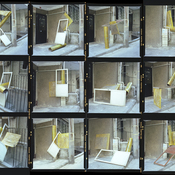