"I decided to translate my own feelings and thoughts of Aleppo into a visual work that tied in with the experiments I had previously done, and which correspond with my ideas.

The idea was to translate the colours and forms of Aleppo into abstract impressions, making them into myth-like visions.

Aleppo, for me, was a sort of myth, a distant and unknown territory that was inaccessible and
which news’ related to it always had a question mark with it: was it true or just a fable?

Instead of shelving the work, I decided to try and open it up to give it a “breaking point” in which the issue of Aleppo, which is dealt with so distantly, suddenly
becomes closer.

In this process, I ended up with a glitch-video of drone-footage of Aleppo, which is rendered almost unrecognisable and abstract, but yet retain some breaks where the reality breaks through the aestheticization." 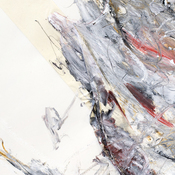